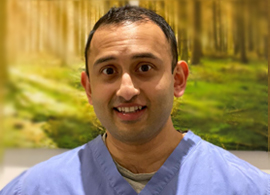 Dr Sanjeev Kutty graduated as a dental surgeon from the University of Birmingham in 2009. He was successful at obtaining a training post with the London Deanery at the highly regarded Lupus Street Dental Practice in Central London. He was granted full membership with the Joint Dental Faculties at Royal College of Surgeons of England in 2011. He pursued his passion to further his clinical and surgical skills by successfully obtaining training posts at the King's College Hospital London in craniofacial and maxillofacial surgery, accident and emergency department, which included treating patients with severe trauma to the head and neck, oral surgery, paediatric dentistry, and emergency acute dentistry.

He went on to work in general dental practice while working as a Specialty Doctor in Oral Surgery at King's College Hospital and as an Honorary Clinical Teacher for fourth and final year dental students at the King's College London University. At King's he taught and practiced oral surgery, intravenous sedation and worked under and alongside some of the most highly regarded consultants in the United Kingdom.

He has been an examiner for the overseas dental examination (ORE examination) at the Royal College of Surgeons of England. He has travelled worldwide to further his knowledge and skills by successfully completing the micro-surgical course at the National University of Singapore, attended externships in oral & maxillofacial surgery in the United States of America at the Harborview Medical Centre and the Swedish Medical Centre in Seattle. He is currently completing his diploma and working toward a masters in dental implantology with the Royal College of Surgeons of England.

Sanjeev now works at the Leamington Spa Dental Practice where he provides the full range of dental services and Invisalign (invisible braces). He is the Secretary to the Warwickshire & Coventry British Dental Association (BDA) helping organize regular lectures and professional development meetings for the local dentists in Warwickshire, Coventry and beyond.

His special interest is in dental implant dentistry.

Back to Our Team